Every now and then, I read a good book and I end up wanting to write about it. So, here’s one. Partly to share with internet strangers… and whoever stumbled upon this.  Partly to reinforce my memory. And partly because why not?

Ever listen to someone talk… and out comes a statement.

And something about it just doesn’t sound quite right.

You’re not sure why..

Hours and days pass by.

And eventually it hits you… “hey… that doesn’t make sense.”

I remember once being asked, “so, you said they’re getting you free gym access, right?” I wasn’t. Funnily enough, I never mentioned that that’d be something I’d get. And after that, something didn’t sit well with me. What an odd question. It felt off, but I couldn’t process it until a few days later. What it was… was a loaded question. A sneakily framed question that assumes something and forces you to agree to the assumption… if you’re to answer it. It’s like being asked, “why are you always so <insert adjective>?” which assumes that you are <insert adjective> 24/7.

Later, I learned that a loaded question is a logical fallacy.

Which brings me to this book today…

What’s the book? The Fallacy Detective: 38 Lessons on How to Recognize Bad Reasoning. It’s a half-book, half-workbook that teaches you 38 logical fallacies and has you do quizzes to spot the fallacies in examples.

Oh, what’s a logical fallacy you ask? It’s a bad argument. Kind of like when someone says, “didn’t you also break a plate a year ago,” after you ask them, “why did you break the plate?” When they’re not addressing the main point and what-about-ing back at you.

Having said all of that, here are my quick notes on all the logical fallacies in The Fallacy Detective. They didn’t cover all, but they covered most of the important ones.

For more in-depth explanations and examples, check out the book.

Red Herring: When someone introduces an irrelevant point to the argument instead of answering the main point.

Special Pleading: When someone wants a special case or exemption just for them. Like, to not give them a speeding ticket because this is the first time they’ve ever went over the limit.

Ad Hominem: When someone attacks your character instead of your argument.

Genetic Fallacy: Condemning an argument because of where it began, how it began or who started it.

Tu quoque: This is a common one. Dismissing someone’s point because they themselves violate it.

Faulty Appeal to Authority: When you say that something is true because some authority said so… even though they may not be an authority in that field. See any commercial with sports players and non-sports products. Very commonly used in marketing.

Appeal to the People: Everyone does it. Thousands have downloaded this app. Millions have read that book. Saying something is true because other people say so. Very commonly used in marketing.

This is one fallacy I have trouble with.

Equivocation: Changing the meaning of a word in the middle of a sentence. You’ll see this comedy and memes most often.

Loaded Question: Asking a question that comes with an assumption that you didn’t agree to. It’s 2 questions in one really.

Slippery Slope: Thinking that the worst possible thing will eventually happen if we take one step…. which will lead to another step… and another… and another… until… the worst thing happens.

Part-to-Whole: What is true of a part of something must be true of the whole thing. “We made this cake from the best ingredients!” Very common in marketing.

Whole-to-Part: What is true of a whole thing must be true of each of it’s parts. “He’s from Ivy league so he must be hard working.” Very common in marketing.

Either-Or: The good old “either my way” or “the highway” argument where someone only gives you 2 options… when there could be more. And by the way, if you don’t like this article, then leave! (See what I did there?)

Hasty Generalization: Generalizing based on a small sample or anecdotal evidence.

Weak Analogy: When things with minor similarities are claimed to be the same.

This one reminds me of apples to oranges.

Post Hoc Ergo Proper Hoc: Claiming that if A happened before B, then A caused B. 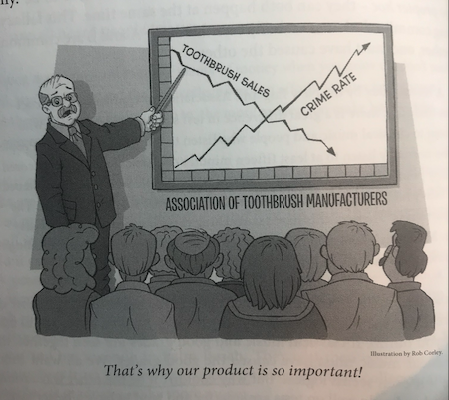 Proof by Lack of Evidence: When someone claims, “it’s true because you can’t prove it’s not true.”

Appeal to Fear: Getting you to do what they want due to fear of consequences.

Appeal to Pity: Getting you to do what they want through pity.

Bandwagon: You should do it because everyone else is doing it. Similar to appeal to people. Used in marketing.

Exigency: Getting, or rather, rushing you to do something it because there’s a limited frame.  Used in marketing.

Repetition: Repeating a message or words enough times so that you’ll believe it. Used in marketing.

Transfer: The transfer of good/bad feelings about one thing to another unrelated thing. Like using some likable celebrity in a commercial for unrelated product. If you like them, you’ll like the product too. Used in marketing.

Snob Appeal: Their product will make you better than or stand out above everyone else.

Appeal to Tradition: Tapping into the good old days and traditions to make something more convincing. “We’ve been doing this since 1950!”

Appeal to Hi-Tech: Persuading you to get the newest, latest, greatest, more advanced thing… which may not be even that good. Also involves use of complicated and made-up words to sound advanced.

And there you go. Just a quick rundown of all the fallacies inside The Fallacy Detective.

Writing this up gave a me good review of everything I read earlier.

If you read it too and are looking for some quick Fallacy Detective Book notes or summary as a reminder, I hope it helps.

If you’re looking to check the book out… go ahead and check it out below via my affiliate link.