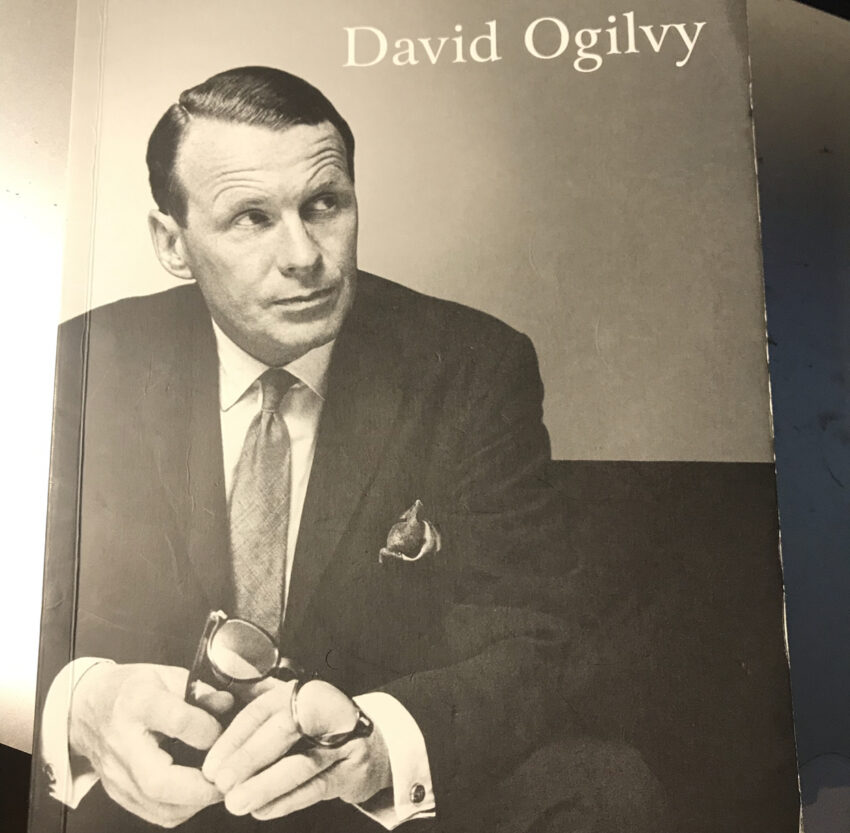 (Note: This post contains an Amazon Affiliate link for the book.)

He was the inspiration behind the TV show, “Mad Men.”

He was considered the father of advertising.

He was an immigrant. A Scotsman in the United States, competing with American agencies, and he succeeded at it too. And this is his book.

If you’re in marketing or advertising, this will be an insightful read.

Especially if you want to understand what makes some advertisements “good.”

On “Confessions of an Advertising Man by” David Ogilvy

This book is 182 pages of David Ogilvy’s thoughts on everything related to advertising. Clients. Writing copy. Commercials. What works. What doesn’t work.

So, why did he know? He was a salesman. Went on to work at his brother’s agency in London. Requested to be sent overseas to the United States. There, he worked at Gallup where he learned plenty about the behavior of the American consumers. He worked for the British secret intelligence during WWII. And of course, he started his own agency. The man walked, talked, ate and breathed advertising.

Here’s what you can expect from Confessions of an Advertising Man by David Ogilvy.

Chapters of “Confessions of an Advertising Man”

Here are some quotes I underlined in Confessions of an Advertising Man by David Ogilvy.  I’m sure there are more that I missed but these are the ones that stuck out to me.

This is the kind of wisdom you can expect across 180+ pages.

— “Rigidity and salesmanship do not combine.

— “There is one stratagem which seems to work in almost every case: get the prospect to do most of the talking. The more you listen, the wiser he thinks you are.

Note: For context, these come from the chapter on how to get clients.

— “A posture of enthusiasm is not always the one best calculated to succeed.

— “The head of an agency has so much on his plate that he is apt to see his clients only at times of crisis. This is a mistake. If you get into the habit of seeing clients when the weather is calm, you will establish an easy relationship which may save your life when a storm blows up.”

Note: I underlined this one because applies to all kinds of relationships. Just think of a friend that only reaches out when there’s drama. And then they go quiet. Until the next problem. What do you think of them? You don’t think very highly of them, right?

— “A manufacturer’s pride in his product almost always blinds him to his shortcomings.

— “A study of the precedents has taught me that it doesn’t pay to advertise two products in one advertisement.”

— “The trick lies in assaulting your audience simultaneously through their eyes and their ears. If they see one set of words and hear a different set, they become confused and inattentive.

— “…but I belong to the third school, which olds that a good advertisement is one which sells the product without drawing attention to itself. It should rivet the reader’s attention on the product.”

Note: I’m a big fan of this point. Just think back to any movie or book where you were NOT drawn into the story. And you were incredibly aware that you were watching a move or reading a book. And how tiring it was getting. “Ugh, this book is really dragging on and on.” Or, “jeez, can your sentences be any longer?”

That’s when you start tuning out.

— “Dr. Gallup has discovered that the kind of photographs which win awards from camera clubs – sensitive, subtle and beautifully composed – don’t work in advertisements. What do work are photographs which arouse the reader’s curiosity.”

Note: This reminds me of all those creative commercials made by agencies. The kind that go on to Cannes, but can’t move product. Because the viewer is all, “oh, wow, what a great commercial” and not “wow, I need this product.”

— “Keep your illustrations as simple as possible, with the focus of interest on one person. Crowd scenes don’t pull.”

Note: This is where advertorials  – ads written to look like newspaper articles – became popular.

— “You should never use a photograph without putting a caption under it, and each caption should be a miniature advertisement, complete with brand name and promise.”

Note: We don’t see this nowadays in the online marketing space. Most blogs have random, stock photos that are hardly related to the content.

— “Dr. Gallup reports that if you say something which you don’t also illustrate, the viewer immediately forgets it. I conclude that if you don’t show it, there is no point in saying it.”

Note: Aside from VSLs (video sales letters) done by online marketers, everyone else seems to ignore this.

— “In television advertising, you have 58 seconds to make your sale… don’t mess about with irrelevant lead-ins. Start selling in your first frame and never stop until the last.”

— “I therefore advise you to repeat your promise at least 2x in every commercial, to illustrate it pictorially, and to print it on the screen as a “title” or a “super.””

Note: I can confirm this one. If you’re doing multi-email campaigns, you’ll need something new to say in each one. And news helps with that.

Also, it gives you another reason to advertise to your audience. You have something new. People like new. It’s why they ask “what’s new?” No-one asks “what’s old?”

— “Commercials are for selling. Don’t allow for entertainment to dominate.”

Note: If the entertainment side dominates, the viewer will think “ha, wasn’t that clever? what a nice commercial. I liked it a lot.” And then they won’t buy it.

One can argue that humor and entertainment are important for likability and brand awareness. So that months later, when they actually need your product, they’ll consider it.

But, if you want clicks and purchases right now, you greatly reduce your chances of any sales because… “hey! what a clever commercial. I liked that one thing they said and I’m impressed by the clever thing instead of wanting the actual product.”

— “No advertisement, no commercial and no image can be created by a committee.”

Note: Why? Because when you have you many cooks in the kitchen, they  start asking you to do “this” and “adjust” that. To the point where an ad can lose its potency.

Is Confessions of an Advertising Man by David Ogilvy worth reading?

If you’re not in marketing or advertising, probably not.

If you are, then yes.

It’s a good way to review marketing methods – what works and what doesn’t – and get some ideas of your own?

What ideas did  I get? Well, based on this quick writeup, I need to make sure that the audio and text in videos matches. If they hear it, they must see it.

How long will it take you to read?

Under a week if you have plenty of time. 182 pages isn’t much.

You can get the book below.